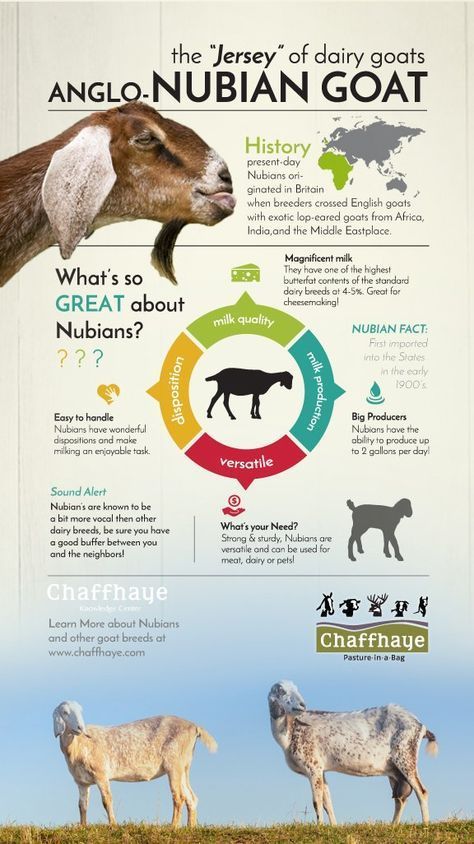 Breed: Nubian goats are called Anglo-Nubian in Britain, where the breed originated. The term “Nubian” was first coined in France, where goats had been imported from the eastern Mediterranean. Nubia was defined as the area along the Nile from Egypt to Sudan.

Origin: In the nineteenth century, native British goats were crossed with imported goats from trading ports in India and the eastern Mediterranean, leading to the development of the breed. There may be slight Swiss dairy goat influence.

History: Trading ships took on goats at ports in India, North Africa, and the Middle East to provide milk and meat during the journey back to British ports. On arrival in England, goat keepers purchased the bucks and bred them with the local milch goat. By 1893, these crossbreeds were referred to as Anglo-Nubian goats. They already showed the distinctive lop ears, roman nose, tall frame, and short coat inherited from the imported bucks.
As the exotic look became popular, Sam Woodiwiss set up a breeding program to produce a registered herd. He imported a Jamnapari buck from India in 1896. Then in 1903/4, he imported a Zairabi buck (a tall Egyptian milk goat), a stocky buck from the Chitral region of Pakistan, and a hornless buck of Nubian type from Paris Zoo. These bucks were crossed with the native British milch goat. The first three sired the original lines that were registered in the official herdbook in 1910. Later, registrations from other bucks were included, including the prizewinning male from Paris. These bucks had a large impact on the breed. The herds were developed as good milkers with fast-growing kids for meat.
A 1906 import to the United States failed to register for breed. However, in 1909, J. R. Gregg imported a buck and two does, and then a further buck and doe in 1913. He started a registered breeding program, with the breed name changing to Nubian. He bred them selectively without crossbreeding. Further imports from England totaled about 30 by 1950.
From the 1940s, exports to Latin America, Africa, and Asia from England and America provided stock for crossbreeding to improve milk and meat yields.

Coloring: Nubians are available in a wide variety of colors and patterns. Black, tan, and chestnut are predominant. White or pale patches or mottles are common. White facial stripes may be an indication of crossbreeding with goats of Swiss origin.

Weight: Minimum—174 lb. (79 kg); Maximum—bucks 309 lb. (140 kg); does 243 lb. (110 kg).
America’s Best Goats for CheeseProductivity: Average 6.6 lb. (3.9 kg) milk per day/1920 lb. (871 kg) over 305 days with 4.8% butterfat and 3.5% protein. Most Nubians possess genes for high production of alpha s1-casein, an important protein in cheesemaking, and a huge goat milk benefit. Nubian production of this protein is high compared to European dairy breeds. Although yield is lower than for most dairy breeds, the high levels of milk solids impart a rich flavor and improve coagulation, making it an ideal constituent for making goats’ cheese. These qualities have helped the Nubian to become the most popular dairy goat breed in the U.S.
​
Temperament: Bright, friendly, and tractable. They call with loud voices when requiring attention. On the other hand, they are quiet when content.